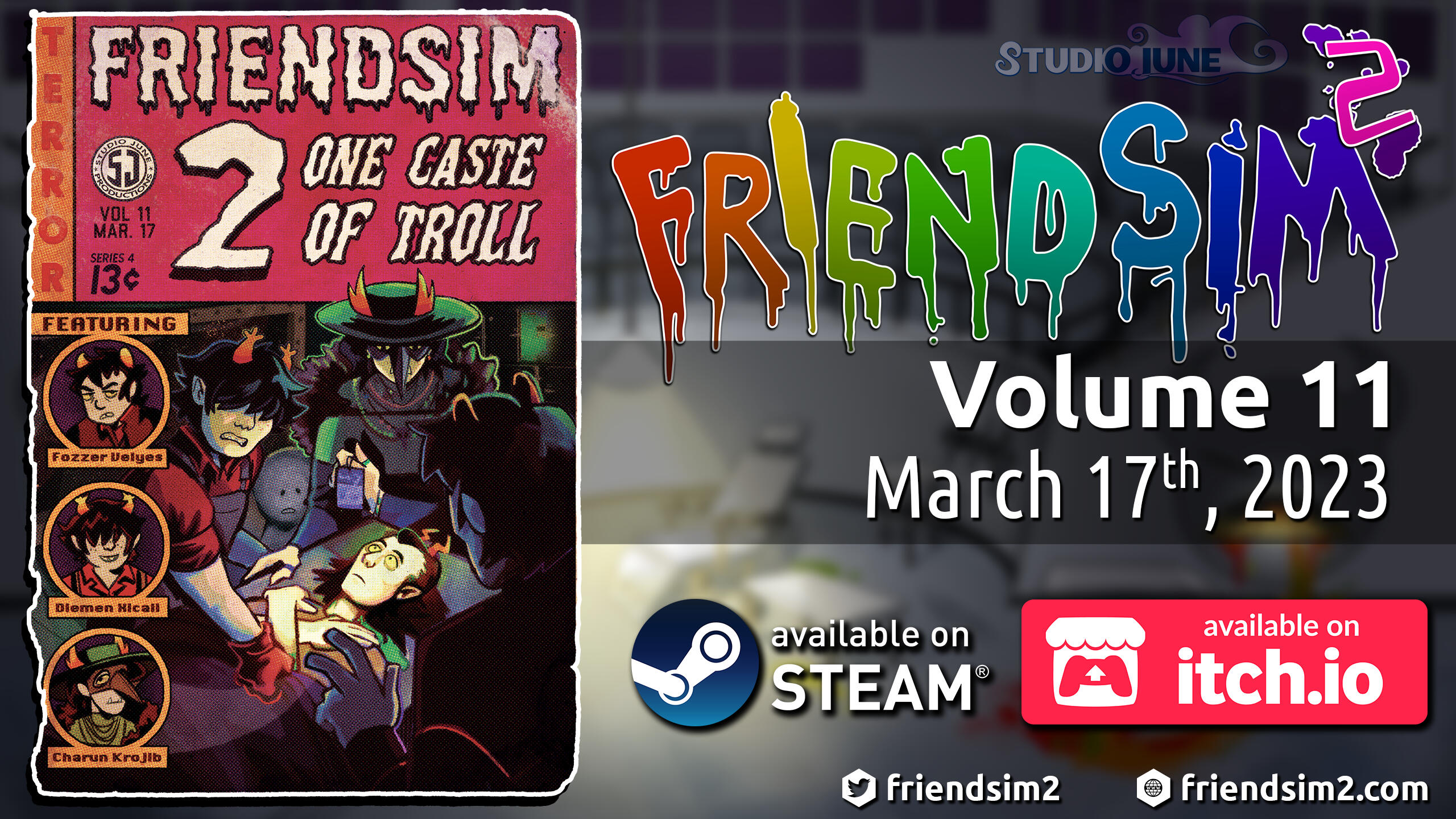 Friendsim 2 is in the development phase - several volumes have significant work done on them and the first release is about 90% complete.Our first volume released on April 13th, 2022 and we will be releasing new volumes approximately once a month.

Our core team is made up of a group of talented Homestuck and Hiveswap fans from a diverse section of the fandom:Jonaya Riley: Director/Lead Writer
A woman who’s written over a million words of Homestuck/Hiveswap-related fiction, including two Hiveswap novels. She serves as the co-director of Stuck at Home Con and is the former narrative director for New Game Plus, and has worked on a number of other fan-projects, including the Pesterquest Fan Dub, the Will it Homestuck? podcast, and numerous others.Anna Marcus: Voice Director
Another long-time fan creator, Anna has been heavily involved in the Homestuck music and voice acting scene, and has been responsible for projects such as the Time’s Apprentice musical, the Broadwaystuck 2020 panel, and countless comic dubs and other voice-acting projects. She was a writer for Distantquest, voice-actor for the Pesterquest fan dub, and much more!Bucky Grant: Associate Producer
A long-time Homestuck fan and content creator, Bucky has been involved in a wide range of fan projects. They’re the former director of New Game plus and the host of the former Will it Homestuck? podcast, and are prolific writer, artist, and voice actor.Momo: Associate Producer
An accomplished artist and writer who's been in the Homestuck fandom since the beginning. Momo is the creator of the Act 8 fanventure, is the co-director for New Game Plus, and has been involved in countless other fan projects over the years.

Our team includes writers, artists, and musicians from throughout the fandom, including creators who have worked on other major fan projects (including Befriendus, DistantQuest, Midnight City, the PesterQuest fan dub, and more!) as well as artists and musicians who have previously worked on Hiveswap Act 1 & 2, Hiveswap: Friendsim, Pesterquest, and Homestuck^2.Creators include a diverse and multi-faceted group of people from throughout the Homestuck fandom. We hope that our diversity of experience brings a fresh, new perspective to the Hiveswap world, and a richness and depth to the characters that players will find refreshing and enjoyable.

This is a visual novel like Friendsim or Pesterquest... but also, it's kind of not. Players will once again fill the oversized hoodie of the MSPA Reader and engage in dialogue with a variety of interesting characters, both old and new.But things are different this time - this is a side of Alternia you haven't seen before. Your friends are older and more experienced, and you've changed as well.You actions now have real, meaningful consequences. Each volume will take into account the choices made in previous volumes, leading to a variety of endings that flow from the decisions that you make throughout the game. All progress is saved with your game - including the choices you've been making up to that point.Not only that, but be ready for new twists on the old visual novel formula. We won't spoil anything, but we will say this...It's going to be a long journey - be ready for anything!

Friendsim 2 takes place after both Hiveswap: Friendsim and Pesterquest. It features MSPA Reader, once again back on Alternia and looking for their old friends. Of course, things are rarely as simple as they seem.Four and half years have come and gone - and MSPAR may find that things have changed a lot since they last set foot on Alternian soil.Taking place in a timeline where the events of Hiveswap Acts 1 & 2 never happened, Friendsim 2 explores a possible conclusion to the Friendsim and Pesterquest story. The specifics of that conclusion are up to you.Salvation or revolution... it's your choice to make.